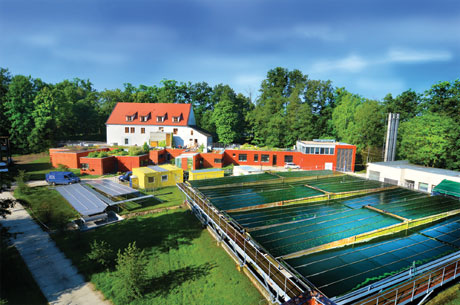 The Institute of Microbiology of the CAS represents the largest scientific body extensively exploring life cycles, molecular mechanisms and regulatory systems of various microorganisms such as bacteria, yeast, fungi and algae as well as mammalian cell lines with respect to basic research questions as well as their prospective practical exploitation in medicine and industry. The main research interests of our Institute represent cellular and molecular microbiology, genetics and physiology of microorganisms and their resistance to antibiotics, production of microbial metabolites and their biotransformation, and grading up production strains by genetic modifications etc. Another main research direction is embodied by soil ecology, ecotoxicology and microbial degradation of organic pollutants in the natural environment. An immunological section of the Institute then studies the importance of microorganisms in phylogenetic and ontogenetic acquisition of immunity as well as during the onset of autoimmune diseases and, last but not least, it is also focused on immunotherapies of oncogenic diseases.

Institute of Microbiology of the CAS has an internationally recognized collection of basidiomycetes and its own biotechnological unit, which is mainly used to monitor microbiological and biotechnological processes at a semi-operational scale.

IM CAS has three satellite working units outside of Prague; the first of which is in Trebon (research on phototrophic microorganisms), the second is in Novy Hradek (gnotobiology) and third is in Nove Hrady (Center for Nanobiology and Structural Biology).

Despite the fact that the Institute of Microbiology of the CAS is preferentially focused on the basic research, many of its outputs find or will find practical use in pharmaceutical as well as biotechnological industry as documented by a genuine interest of a number of private companies in our scientific work.

The Institute plays a significant role in undergraduate and doctoral training programs. In several accredited study programs scientists of the Institute supervise many doctoral and undergraduate students. They also lecture at the universities and organize training courses. Several joint research and pedagogical units have been established in cooperation with different faculties of the Charles University in Prague and University of South Bohemia. The Institute has a number of joint projects, within the programs of the Ministry of Education, Youth and Sports in particular.

Institute of Microbiology is involved in numerous grants and projects of international cooperation; some of them are financed by resources of the European Union. The Institute also frequently organizes important international congresses, symposia and conferences.